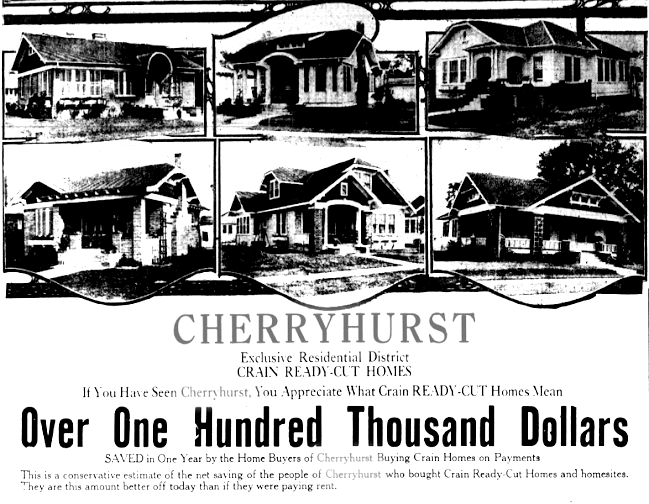 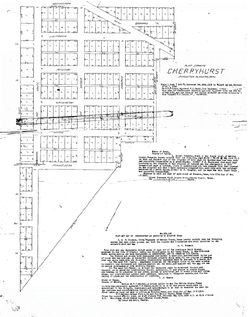 Cherryhurst plat, 1916
Located in the Montrose area of Houston, Texas, the land that would become Cherryhurst was originally part of a “1 league and 1 labor” land grant that Obedience Fort Smith received from the Republic of Texas in 1838. Smith deeded pieces of the property to various parties over time, including a 150-acre tract to Mirabeau B. Lamar, the second President of the Republic of Texas. Lamar’s home was located on this tract, just to the east of Cherryhurst, where Commonwealth and Hyde Park intersect. The Lamar Tract was parceled off over time, including 45-1/2 acres sold to H. H. Cherry by Sam Roos in 1906 for $37,000. Less than a month later, D.B. Cherry paid H.H. Cherry $10 plus “other valuable considerations” for it and began the process of platting the land. The Cherryhurst plat was issued by the City of Houston in 1916. 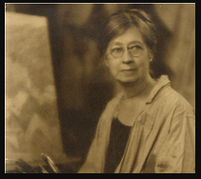 Emma Richardson Cherry
Dillon Brook Cherry was an entrepreneur who moved to Houston in 1892 to take part in the lucrative cotton industry, but ended up making his fortune as an oil man. Cherry was married to Emma Richardson Cherry, an internationally-known working artist in a time when that was unheard of for women. Upon moving to Houston from Kansas City to be with her husband, Emma Cherry continued her work of promoting the arts. She started the Houston Public School League in 1900, which would be renamed The Houston Art League in 1912 and would be the founding organization of the Museum of Fine Arts, Houston. Emma Cherry is considered “Houston’s First Modern Artist” and was one of five Houston artists commissioned by the US government to create murals on public buildings, some still on display today in Houston Public Library’s Julia Ideson Building. 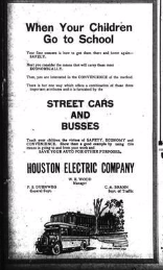 Houston Electric Company advertisement
Cherry used his oil wealth to buy real estate in the Houston area. The “Nichols-Rice-Cherry” house, which was moved from Courthouse Square to Fargo Street for the Cherrys to live in, now sits on display as the first historic building to be moved into Sam Houston Park. At the turn of the twentieth century, most of Houston’s residents lived and worked downtown. Cherry gambled with his purchase of Cherryhurst that Houstonians would be ready to move out of downtown to what was then the suburbs. Cherry sold a few lots from a sales office located in the “park block” of Cherryhurst. The streets were “paved,” but Fairview (then called Minnesota) and Westheimer were gravel. The Houston Electric Company streetcar ran down Fairview, turned down Mandell (then called Dodge-Ford) and turned back at Richmond. Despite the opening of this Montrose line in 1912, the move out of downtown neighborhoods was slow. Eventually, the ease of transportation around town would help to establish Montrose as a suburban neighborhood where middle income Houstonians could reside, but not in time to save Cherry’s investment. In 1921, Cherry cut his losses and sold the remaining 230 lots for $94,380 to an established home builder, E. L. Crain. 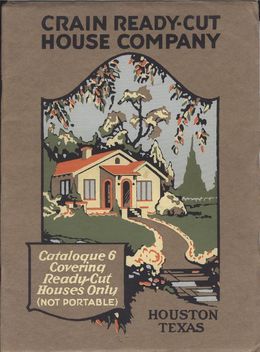 Crain Ready-Cut House Company catalog
Cherryhurst’s association with Edward Lillo Crain is especially unique. Crain began his career as a bank clerk, but eventually established his own real estate business in 1913, which bought miscellaneous properties in the Montrose area. He began building homes, with styles ranging from small bungalows to mansions. In 1917, Crain bought the Williams House Manufacturing Company. Crain would take the kit concept developed by Sears catalog house sales and the locally-owned Williams Company to create a model for development in Houston that still exists today. Construction materials, and even millwork, such as window frames, door frames, cabinets and built-ins, were all pre-cut. Plans were published in Crain Ready-Cut House Company catalogs and could be modified to the owner’s or the site’s requirements. The Ready-Cut method made the construction process faster and less expensive, reduced construction site waste, and made Crain’s one of the first “green” companies in Houston. But the Cherryhurst plat was also an opportunity for Crain to explore an idea he’d been working on for some time: Crain would act as the developer, the supplier, the builder and also provide financing for the homeowners. This vertical integration program was so successful, Crain used it to market his subsequent developments. 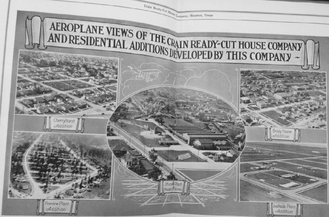 Crain additions including Cherryhurst, Pineview Place, Brady Home and Southside Place
Cherryhurst Park also had an important impact on future Houston development. Block 13 of the original Cherryhurst plat shows 12 lots originally intended for development. Crain credited the Cherryhurst residents for their advocacy in fighting for the “park block” in its center. In a 1930 article about the importance of parks in the Houston Chronicle, Mr. Crain stated: “When Cherryhurst was platted, a section in its midst was reserved for a temporary park and playground. The plot enhances the beauty of the section and helped us sell it. After most of the other lots were sold and houses built on many of them, the reserved section was split up to be sold. The people who had built homes there wanted the park and playground to stay. The residents petitioned the City to buy it for them. Finally after a number of conferences, the City acquired the property for half its value, and I lost some money to be sure, but I gained an insight into the value of parks and city dwellers, for which I have been thankful ever since.” The City established Cherryhurst Park in 1925, and it became the “town square.” Crain’s lesson was learned; He always included a park in his future developments, such as Southside Place with its well-loved Firetruck Park—and the cost of that parkland was prorated to those lots around it at initial sale.​

WPA plaque on the Cherryhurst Community Center
Residents founded the Cherryhurst Playground Civic Club in 1930 to “assist in bettering conditions in and around the Park.” Memberships cost $1.00 for a year and covered the entire family. This included holding regular neighborhood meetings with free movies outside on Monday nights, softball, the “Cherryhurst Circus,” Ladies Garden Club, square dancing, playground equipment, horseshoes, shuffle board, a tennis court and a wading pool. Lights were strung across the park to make it usable at night. In 1939, a Federal Works Agency/Public Works Administration project built the Cherryhurst Community Center, which is still in use today. In 2014, the Cherryhurst residents formed the Friends of Cherryhurst Park to keep the City from shuttering the historic park building during a budget crisis. In 2018, the Houston City Council recognized the Cherryhurst Park Clubhouse as a Protected Landmark. 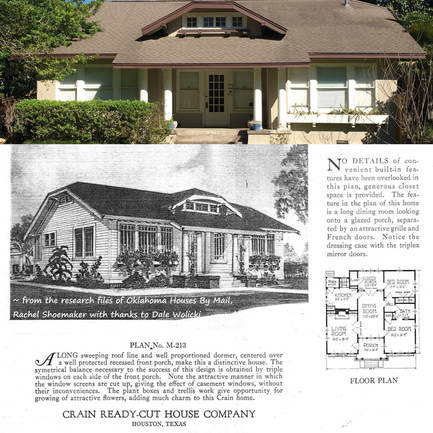 1608 Haver Street in 2018/Plan No. M-213 from a Ready-Cut catalog
There is a strong visual similarity with many of the homes in Cherryhurst and images from Crain Ready-Cut House Company catalogs, suggesting the houses in Cherryhurst were designed by Crain designers. Oral history indicates that 1603 Cherryhurst was indeed a Crain home, and this house’s owner received a Good Brick Award in 2016 from Preservation Houston for its thoughtful restoration. Not all of the houses in Cherryhurst were Crain Ready-Cut. Crain would sell lots to buyers who wanted to use their own architects to design their homes. 1802 Cherryhurst Street, for example, was designed by Herman Lloyd, a well known Houston architect who graduated from Rice University in 1931 and was involved in the design of Sewell Hall on the Rice campus and the Houston Astrodome in 1965, a Recorded Texas Historic Landmark. 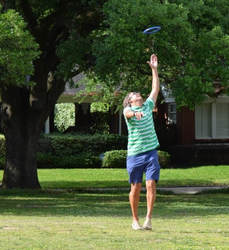 Cherryhurst Park, today
Most lots in Cherryhurst have alley access to garages instead of driveways, providing for a uniform and pedestrian friendly streetscape. The streets are curbed with sidewalks, and the alleyways behind the houses hide trash cans, utility lines and boxes. The welcoming environment encourages a walk around Cherryhurst Park. Many homes have been modernized over time to meet current tastes and standards but still reflect the original integrity with which they were built. Other original homes have been torn down, replaced with new, single-family homes or townhome developments. The original deed restrictions lapsed, which allowed for commercial to take root, as well as lots intended for single-family use to be divided into two, three, four and sometimes up to five tracts. New deed restrictions were adopted in 1991, but they did not stop townhome development until 2017. The new deed restrictions were strengthened, in 2014, 2017 and again in 2020. In the 30s, a house and lot in Cherryhurst cost about $6,000, and the live oaks planted by the developers were not providing much shade yet. Residents shopped at Sacco’s for groceries, Cherryhurst Drug Store and Durrand’s Bakery (now Hugo’s). Although the neighborhood landscape has changed over a century, Cherryhurst maintains its historic integrity, character and charm as well as its active civic association. Cherryhurst Park remains the centerpiece of Cherryhurst, a green space which sets the neighborhood apart from other urban Houston areas.

This history is a compilation of graduate research papers by Debra Bach and Syd Moen, compiled by Emily Covey.